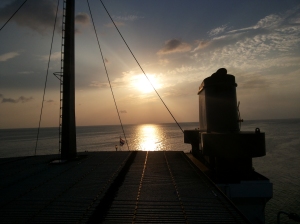 So much has happened since my last blog post, I didn’t realize it had been over a month since the last time I wrote. Every time I think to write my blog there is always something new and exciting to distract me. I feel like it is rare that I get a moment these days where I can just take the time to focus on writing.
A lot has changed and up to this point it has all been change for the best. The fortune teller was correct when he said that March was my lucky month because it surely has been. To begin with, I GOT A JOB!!! I got a job as one of the two wedding planners for an amazing wedding company here in Koh Samui. I am a wedding planner on a beautiful island in southern Thailand….I’ve had to repeat that to myself a few times but I don’t think it has actually registered in my brain yet. I never really thought that was even a possibility when I came here.

The things that happen in life are just so unexpected and those things that we don’t expect can often be the most wonderful parts.
I can’t express how lucky I was to get this job. I won’t go into too much detail about the process of getting this job but what I will say is that everything that happened leading up to me getting this job was clearly meant to happen. I was extremely discouraged at one point because I could not find work as a teacher and I was fairly certain I would have to move to the mainland of Thailand to find work. Something though in the back of my mind told me to stick it out and I just had this feeling that something good was about to happen for me. I had no idea how good it would actually be! To be fair, I enjoyed teaching and it felt rewarding and teaching English is technically why I moved here, BUT I love the event industry. Anyone reading this who knows me knows that I studied events in school and I have a lot of experience in the industry. So for me to get a job as a wedding planner was really fitting. I’ve now signed my contract with my new employer and it is 2 year contract which is renewable at the end of the 2 years. I’ve never actually committed to a job like that so really it was a big step for me and I feel great about it. If nothing else I will at least get to continue for my love affair with Samui for 2 more years.

Everyday my love for Samui and for Thai culture grows. I see new things that amaze me and I meet people every day who are just exceptional. One thing that I’ve grown to love about Thailand is that I will be driving and within a 100 meter stretch I will smell literally the worst and best smells I ever have before. Thailand is just hilarious like that, you get a little bit of everything here. I never thought I could love a place more than I loved London but Samui has already surpassed that!

I have already made a few friends who I hope that I will never lose touch with. Everyday has been a new adventure for me and it’s been very exciting. Within the past month I’ve traveled across Thailand to Phuket where I also visited Coral Island, I’ve gone to Malaysia on a visa run, gone to Koh Phangan for the infamous full moon party, and so much more. I’ve been given an expensive and rare necklace as a blessing and good luck charm, had my heart broken, gone to a traditional Thai concert, got a pet and killed it the same day, etc etc. The list of adventures and hilariousness goes on and on. Just so anyone reading this doesn’t think I’m a psychotic animal murderer I will explain the death of my “pet.”
I was at the beach swimming one day when I found a live clam in the water. For some reason I was extremely fascinated by it and decided that it was going to be my new pet. My intent was to take it home and put it an aquarium of sorts. Shortly after finding my new pet I ran into some of my friends on the beach and we got to talking. At this point my pet was safely in some water enjoying its life. The thing about running into your friends in Thailand though is that hours upon hours can pass without you really realizing it because it is just such a relaxed lifestyle here. So needless to say I was with my friends having some drinks for about 6 hours and at some point during the evening I just put my new pet my in back pack (with no water). To be honest 2 days passed with my backpack sitting on the floor of my bedroom untouched. I was laying in my bed trying to sleep but there was some horrendous smell and I could not sleep until I found it. I searched my room everywhere for about 30 minutes and couldn’t find the source. Then I saw my backpack on the ground and it hit me, I had neglected my pet and let him die in my backpack and now he was stinking up my room to take vengeance on me. My bag was full of “clam juice” and my boy lay in there with his shell completely wide open and he was dead as a doornail. SOOOO yeah that happened. Luckily the smell has now left my room and I’ve decided I won’t be getting another pet clam for a while. We’ve got about 7 cats/kittens that roam in and out of our house whenever they feel like it so for now they can me my no strings attached pets.

For the first month in Samui Latrisha and I were living in a room on what I’ve now found out is ghost road of Samui (where the most ghost sightings are). We were sharing a room and a bed and needless to say we needed our own space. We spent days driving all around the island looking for a new place to live. Thai people tend to live with multiple people in 1 room and this is something that is just normal here. So trying to find a two bedroom place seemed like a futile attempt. On our search we came across a string of town houses and wanted to check and see if there were any open units. There was a man who lived in one and who spoke a bit of English so he was being kind and helping us to speak with the landlord who did not speak English. It turned out there were no available units so this man that we met decided that he would stop whatever he was doing and show us around to other places that might be available. He interrupted his day just out of the kindness of is heart and showed us around. He spent about an hour trying to help us and did not expect anything in return. Once again Thai people amaze me. Throughout our search two other friends helped us and only for our benefit, not for theirs. In the end we found a great two bedroom house in a great location and now are happily living in our new place. The house search was pretty brutal but undeniably hilarious and fun as we got chased by a group of about 60 chickens while looking at a house. There were also a couple of dog chases and other fun happenings but getting chased by the chickens was actually one of the funniest things that has happened yet.

As I’ve already mentioned I love Samui very much and I am really excited to see what the next two years here will be like for me. There is still so much on this island that I have not seen and that still need to explore. I have though found great places to eat, drink, see great sights, people watch, and I’ve also discovered by favorite thai food and drinks. Just about every day I eat at the same restaurant. On a dirt and rock road there is a string of about 4 restaurants that are essentially just huts and they have the best food! The food is so cheap and so good and by now Latrisha and I have gone there so many times that we are friends with all the staff and play with their adorable kids when we are there. The best part about these restaurants is obviously the food but the second best part is this person who we’ve started calling the king of the jungle. The king of the jungle is a man who walks around the restaurants every day in nothing but a towel. I see this man every day and every single time I have seen him he is wearing just a light blue towel and a pair of flip flops. I should mention as well that I go to restaurant at different time each day and I always he see him in his towel at different times. He is probably about 60 years old and looks very serious and he walks around sort of inspecting things. I’m assuming he owns one of the restaurants and just likes to see what is going on but never really says anything. I started taking pictures of him every day so I can just have a laugh at how great it is that he only wears a towel. I don’t know if this is funny to anyone else but to me it is hilarious.

As I mentioned before I took a trip to Phuket which is Thailand’s largest island and is on the opposite side of the country in the Andaman Sea. The Phuket trip really is a story for another time but the reason I mention it again is because on my way home from Phuket something magical happened. Well I suppose it was actually more scientific than magical BUT to me it was a good omen and made me very happy. Because I live on an island I have to take a boat to get back here if I ever leave (flying is too expensive). On the boat ride back to Samui I was staring out the window thinking about what the heck I was going to do if I couldn’t find a job on the island. As I was staring out the window at the water I noticed a little rainbow. Then I noticed another, and another, and another and on and on and on. The boat was causing waves of water to shoot up into the air and the way that the light hit the water made small rainbows over and over. I sat and watched these rainbows shooting through the air for about 5 minutes until they finally stopped. At that moment I just felt like those rainbows were my good omen telling me that heading back to Samui and sticking it out until I found a job was the right decision. I know that sounds corny but that’s the way I felt and for some reason those little rainbows made me feel happy and filled me with a lot of hope. I had just finished reading The Alchemist so that probably had something to do with looking for omens but nonetheless I was right the rainbows were good. I hope you all find your good omens! Chok Dee!

I shall update again soon, hopefully sooner than a month.